On November 23rd, at CSKA Arena a musical duel between Sergey Shnurov and Noize MC will be held. 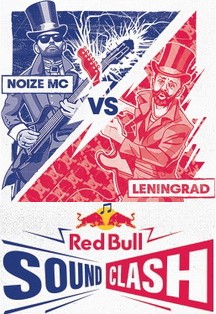 On November 23rd, at CSKA Arena (Moscow) a musical duel between Sergey Vladimirovich Shnurov (Leningrad) and Ivan Aleskseevich Ivanov (Noize MC) will be held in the full compliance with the duel code with only one exception – instead of weapons the opponents will be handling microphones.

Red Bull Sound Clash is a concert battle for the honor and title of the most distinguished modern poet. Leningrad and Noize MC will both have the opportunity to prove their creative supremacy within four rounds. The audience will have to choose the winner.

Opening act – the opponents and their bands warm up performing 3 songs of their own repertoire.
Round 1 – COVER: Leningrad and Noize MC perform their own version of the same popular song in their signature style.
Round 2 – TAKEOVER: Each party performs his own hit, however the opponent has the chance to hijack the microphone and finish the hit in their own way.
Round 3 – CLASH: The opponents take turns in performing their own songs in three different genres (for example, country, reggae, jazz).
Round 4 – WILDCARD: Each band performs one more song with a featured artist. Until the very last moment, the names of the so-called Jokers are kept in secret.
Finals.